All y’all that wanted me to blog may best be served remembering the classic idiom “Be careful what you wish for.” (Yes, I’m opening my blog with “All y’all”, a disclaimer, AND an immediate parenthetical. You’ve been warned.)

As a man with a billion thoughts on a million topics, what will be the focus of my very first blog post? A lengthy diatribe on the heartache of being a life-long Cubs diehard? An impassioned plea for people to stop all the feuding and fighting long enough for a group hug? A concerned look at how the escalating power of attack ads is shaping political dialogue in our country? A deep think-piece about how modern social media has created a world where the immediacy of our interactions has devalued the act and the art of communication?

I want to talk about a conspiracy theory I have concerning two (supposedly) different French Electronica/Techno Music groups. 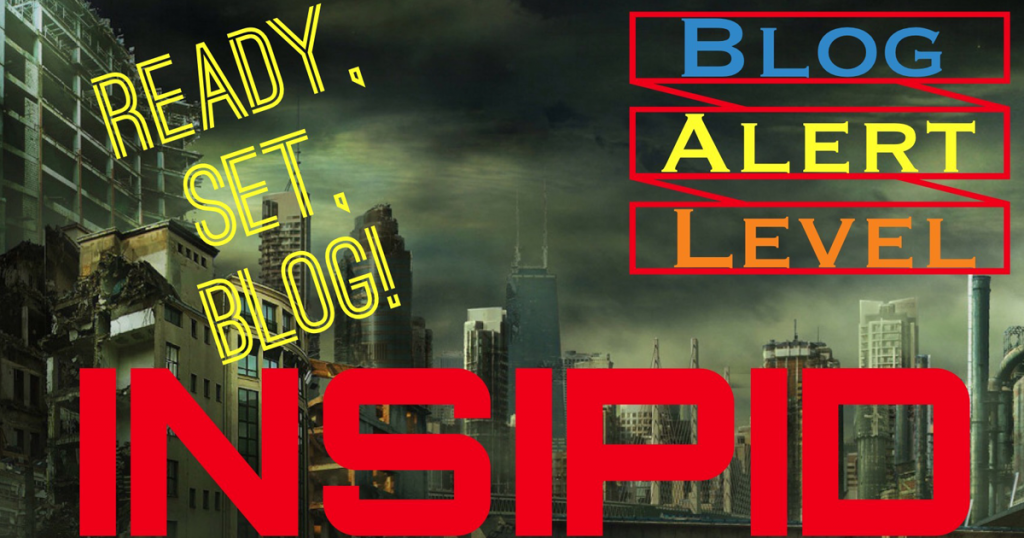 Before you dismiss this outright, just know that there are handfuls of French websites dedicated to this entire topic. Sadly, I don’t understand a LICK of French (much to the chagrin of Mr. Recchia, my French Teacher during Sophomore Year), so they were of no help to me. But, if you want more of ‘this’ (referring to this mediocre and rambling blog), it’s out there. Bring Google Translate. And expect a lot of inferior graphics, like this one… 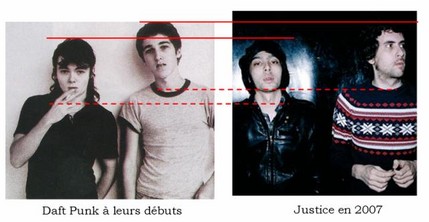 Thanks to the mega-success of their 2012 album “Random Access Memories”, the French Techno band Daft Punk is now known throughout the world. Justice, a different (?) French Techno band may be popular, but they aren’t nearly as famous. 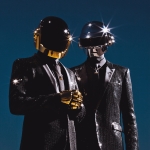 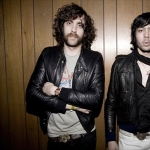 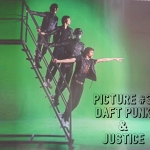 I’m not enough of a music expert to discern if the reason Justice and Daft Punk sound similar to each other is because they both work in the same bustling genre of French Techno (Don’t laugh- it has more influences on popular music than you’d think), OR if perhaps they occasionally sound the same simply because Justice has been heavily influenced by Daft Punk, as MANY techno and electronica artists have been. (Sisyphus Quixote included!) What I’d rather focus on is the PHYSICAL evidence. Don’t let Picture #3 above fool you. That could be anybody in the Daft Punk outfits. Believe nothing, question everything. Except for me. Believe me, but don’t question me at all. I’ve got this. I wouldn’t mislead you.

Under those masks, they are people. They aren’t robots. They are human beings with names. French names. Confusing French names. Names like Thomas Bangalter, and Guy-Manuel de Homem-Christo. Okay, I’ll give you that “Thomas Bangalter” isn’t a confusing French name, but his partner covers the category in spades. Just for reading this paragraph we’re ALL a little more French now. From here on out, they are “The Tall One” (Bangalter) and “The Short One” (Guy-Man). In Justice, we also have a Tall/Short duo. THEIR “Tall One” is Gaspard Auge, and “The Short One” is Xavier de Rosnay. (No, really. After all this, no matter what you believe, these names are FACTS. Isn’t it silly how the French are different than us? Silly French.)

Let’s start cutting to the chase of this conspiracy theory, especially since I’m just going to denounce it at the end anyway….

Here’s a few early pictures of Daft Punk, without masks, and a few pictures of Justice from their own early years. The Daft Punk pictures are pre-1998, and the Justice pictures are 2006+. Is it possible that Justice is just the same two people, all grown up? Since they say a picture says 1,000 words, here’s 6K worth. 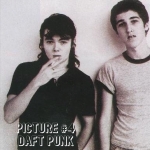 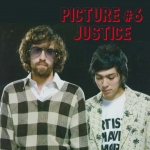 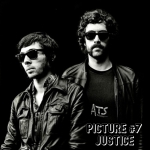 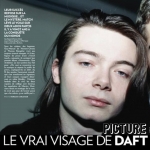 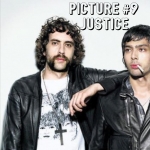 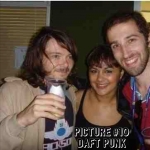 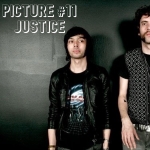 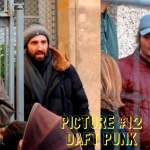 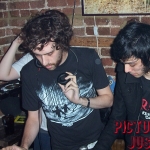 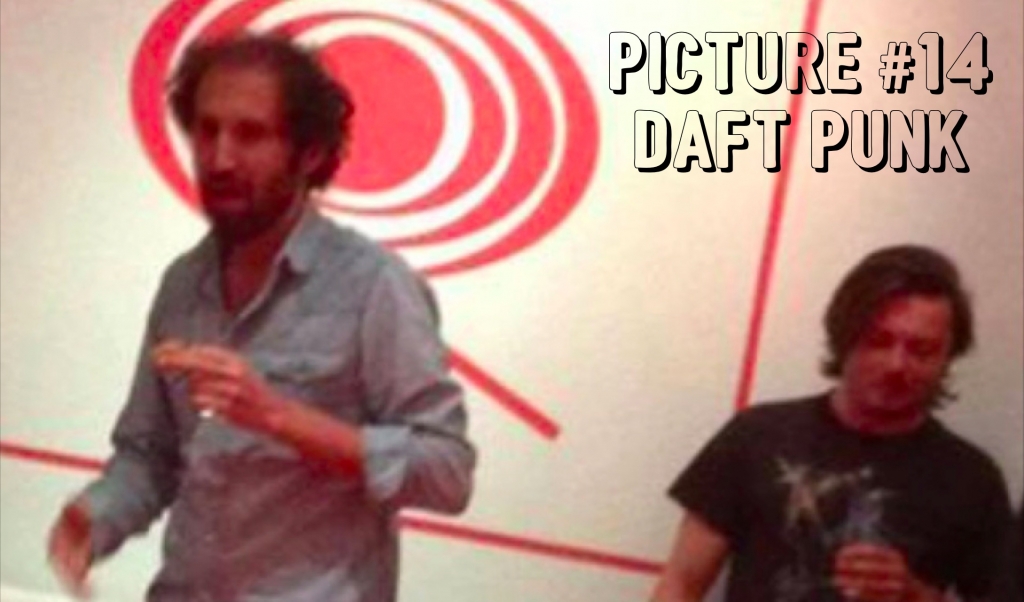 Admit it- you have chills right now. You don’t know where to turn. You want to call your friends and demand that they look at this RIGHT FUCKING NOW. You want to make this viral so that you can get a group consensus. (Please? PLEASE? What? No? You’ll do if for that god damned DRESS.) BUT- Before you start calling HBO and demand that they put a REAL journalist on a documentary exposing this, let me admit this dark dirty secret – Even I’M no longer convinced that they are the same people. For a brief while, I was seriously convinced that they were. And then it hit me- This is what Justice WANTS me to think. Boom. That debunked it for me. They recognized their own basic physical resemblance to earlier pictures and made sure to strike similar poses and to never deny the rumor.

Plus, while you can see the similarities, it’s also easy to spot the few ways in which they ARE different. Especially with “The Short Ones”. Once you stop WANTING to see them as being the same, it seems that it’s obvious that they actually aren’t the same people.

BUT THEN… Recently I saw a few pictures that made me question what I thought I knew. (If this were a Buzzfeed article, that would be in the headline.) I was pretty convinced I’d debunked the conspiracy theory, but lately I’m not so sure. First, I’d like to show you an ‘older’ picture I’ve known of for years of The Tall One from Daft Punk DJ’ing in LA at a private party a few years ago. Once you know it’s him, it’s not hard to recognize him. 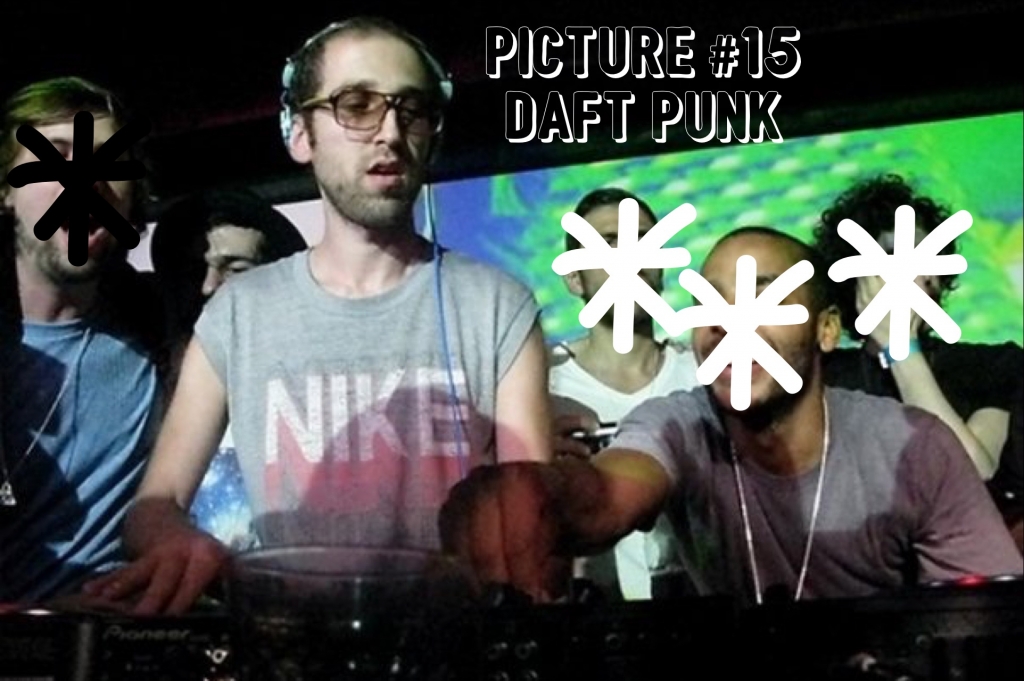 And then, only fairly recently, I saw the following two pictures. Go back through all the pictures I’ve already laid before you and study those faces. THEN tell me who you think this is. Is this Justice? Is this Daft Punk? WHO IS THIS??? I’m a little scared, and I need your help. 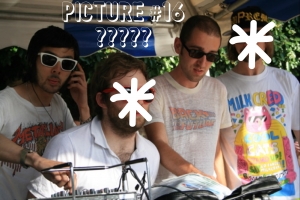 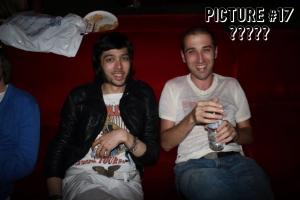 Sure, the logical part of me wants to come to the conclusion that it’s simply The Tall Guy from Daft Punk hanging out with The Short Guy from Justice, and that’s the most likely and obvious conclusion… but… fuck you! I want my mystery! I want my conspiracy! This is just a red herring by them to throw us off the scent. Right? Right? (Don’t take this from me. I need this.)

Thanks for reading. Now please check out my podcast. It’s exactly like my blog, except it’s out loud. And there are far fewer references to French Techo Music OR conspiracies. Usually none. But otherwise, it’s EXACTLY like this. Without pictures. But, yeah, exactly like this. But good. Listen to the podcast today..